Folks From Here and There 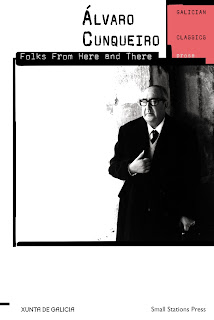 Today sees the publication by Small Stations Press of Folks From Here and There by Álvaro Cunqueiro in Kathleen March's new translation. This follows fifteen years after Everyman published Merlin and Company in Colin Smith's translation and is set to coincide with the 100-year anniversary of the author's birth.

Kathleen March is well known for her work with Galician literature and in particular for her translation of an anthology of Galician short stories, Así vai o conto, and Circling by Ramón Otero Pedrayo. She is professor of Spanish at the University of Maine in the US, where she specialises in Galician, Latin American and Women's Studies.

This book is the second title in the series of Galician Classics created by the publisher Small Stations Press with the support of the Xunta de Galicia. The first title appeared in May this year and was the Collected Poems of Lois Pereiro.
Posted by Jonathan Dunne at 9:00 AM