Neal Baxter was born in Shrewsbury, England, and studied Linguistics and French at York University. He later worked in the Diwan Breton language schools in Brittany. Since 1995 he has taught Interpreting at Vigo University, where he holds a doctorate in Translation Studies.

How did your involvement with Galicia come about?
My wife, who I met during my study year in Brittany, studied Spanish at Roazhon/Rennes University, which has contacts with Galiza and I went with her, variously with and without a grant, to attend the very first three years of Galizan language courses for foreigners organised by the Galician Language Institute in Santiago. After working for the Diwan Breton language schools for several years, we decided to make the move to Galiza, where we’d made a lot of friends who also introduced us both to the Galician Nationalist Bloc or BNG. 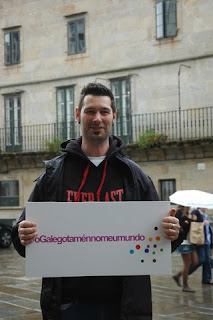 You’ve done a lot of work on the normal use of minority languages and genre/sexuality in translation. Where, in particular, is there a need to raise awareness?
My opinion pieces on Terra e Tempo Dixital deal mainly with the state of the Galizan language and militant atheism. The bulk of my academic research has, barring my dissertation, tended to centre on the place/portrayal of what could best be termed ‘socially marginalised’ groups (primarily wimin) within the context of ‘socially marginalised’ languages (mainly Galizan, but also touching on Welsh and Breton). Using this terminology perhaps helps to draw out how I see the two aspects as being related. As a believer in the impossibility of adopting a neutral stance on social questions within an objectively unbalanced context, my research is ‘engagé’ in the sense that I hope it helps contribute to change for the better, driven by the idea that the priority of preserving Galizan in the face of aggressive competition from Spanish does not require that other issues, such as the use of inclusive language to stimulate debate and explicitly highlight the role of wimin, need be disregarded as incompatible with this ‘higher’ aim. I am also pleased to see that this work has, in part at least, inspired students of mine to take their postgraduate research in that direction, notably with the recent PhD dissertation by Olga Castro, currently lecturing at Exeter University.

As a member of the Galician People’s Union or UPG’s Committee for International Relations, how do you view the role of a non-Galician in the context of Galician nationalism?
I joined the UPG and the BNG as well as the CIG trade union soon after I settled in Galiza. I am very proud of being a member of the UPG, having also served on the Local Committee, and would probably (and fairly) be described as a staunch upholder of the Party line. Although I’ve lived here so long, being a foreigner still provides you with the certain advantage of a perhaps more neutral or objective view of certain issues and a different way of thinking about them derived from a different cultural background. Having a native English-speaker and professional interpreter/translator is of course an asset when dealing with foreign delegations and when translating the International newsletter and press releases. Somewhat paradoxically perhaps I have been the language corrector for Terra e Tempo (official publication of the UPG) for several years because, as a non-native Galizan speaker who hasn’t formally learned any Spanish, it’s easier for me to spot interferences than it is for many Galizans.

How do you find living and raising a family in another culture? What are the specific challenges? And the dominant language at home?
I suppose we can’t pass on everything about Galizan culture directly but then again neither do a lot of Galizans… Fortunately we have a strong network of friends, almost all of whom are Galizan-speakers who provide additional input. My daughter never speaks Spanish with either of us at home and only speaks Galizan with certain friends, although Spanish dominates at school. The main home language is French, which I use with my wife. I only use English with my daughter, except on rare occasions where the situation would make it look as if we were deliberately excluding people, although I usually use English with her in front of friends, at BNG rallies, demonstrations, etc. It’s never even been commented upon, except to say how fortunate she is. We would like to have added Breton which she hears in the summer, but we thought four was enough for the time being.

Are you the Robert Neal Baxter who wrote a book called Chinese: That Marvellous Tongue (Joseph Biddulph, 1997)? What is the most curious language you’ve learned?
Yes, that’s me… At University, as part of the Linguistics course, we had to choose a new language out of Chinese, Hindi and Kiswahili. I dabbled in Yiddish years ago (which actually came in handy in Prague) and learned a bit of Nynorsk with Norwegian friends as university. I also did some Cornish in Brittany. More recently I had a go at isiZulu and isiXhosa (not much of a go really). I gave up Arabic after a while. My most recent interests have been Modern Greek, which I’ve been learning on and off for about four years, and Turkic languages, mainly Turkish and Azerbaijani. I have absolutely no Latin and no Ancient Greek!

Thank you for talking to us!
Posted by Jonathan Dunne at 10:09 AM