To the Winds Our Sails 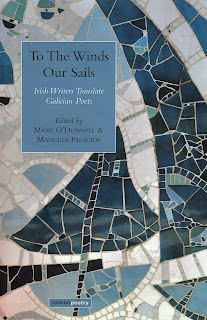 A wonderful publication has just reached my hands, courtesy of one of the translators, Lorna Shaughnessy, and this is an anthology of Galician women poets published in May by Salmon Poetry in Ireland. The anthology, edited by the Irish writer Mary O’Donnell and Manuela Palacios, associate professor of English literature at Santiago University, contains the work of ten Galician poets: Luz Pozo Garza, María do Carme Kruckenberg, Xohana Torres, Marilar Aleixandre, Luz Pichel, Chus Pato, Ana Romaní, María do Cebreiro, María Lado and Xiana Arias. Five poems each – four in English and one in Irish – have been translated using the talents of different Irish writers in what is a trilingual text: Galician-English-Irish. The cover is the work of Siobhán Hutson. Another book of Galician literature, but this time one that has appeared in both Irish and English!
Posted by Jonathan Dunne at 6:45 PM