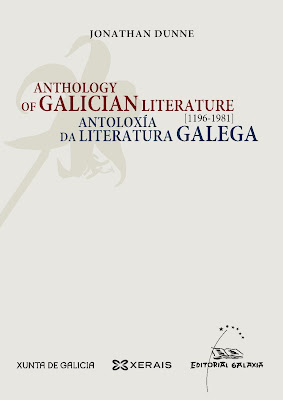 Today sees the publication by Edicións Xerais de Galicia and Editorial Galaxia of a bilingual Anthology of Galician Literature 1196-1981, edited by Jonathan Dunne, which aims to give the general reader a history of Galician literature through the texts themselves. Fifty-five texts by forty authors (and six voices that are anonymous) have been translated by a total of twenty-two translators working in the field of Galician-English translation. These range from medieval songs or cantigas to folk tales and verses, learned poetry, poetry of the Galician Revival (or Rexurdimento) and classic authors of the 20th century writing a mixture of fiction, poetry, essay and theatre. While the editor, Jonathan Dunne, chose the genres, authors and books that would be represented in this anthology spanning 785 years, from the first literary text written in Galician-Portuguese to the 1981 Galician Statute of Autonomy, the texts themselves were chosen by Galician writers and specialists from José Ángel Valente to Carlos Casares, Manuel María, Uxío Novoneyra, Xosé Luís Méndez Ferrín, Manuel Rivas and a host of others. In total, 124 people contributed to this book, which it is hoped will act as a letter of introduction to all those from outside who wish to know more about Galician culture and the foundations of contemporary Galician literature.

Coincidentally, Francis Boutle Publishers are due to bring out another historical anthology of Galician literature, Breogán’s Lighthouse, edited by Antonio Raúl de Toro Santos. These two books will bring the total of Galician books published in English to 38.
Posted by Jonathan Dunne at 9:00 AM