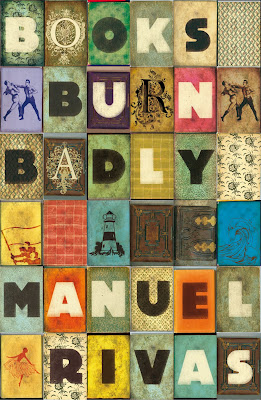 Manuel Rivas’ latest novel, Books Burn Badly (Os libros arden mal), is published in a magnificent hardback edition on 18 February by Random House. This is Manuel Rivas’ sixth publication in English. Harvill Secker (previously Harvill Press) has published three novels and two books with short stories, while Small Stations Press brought out a selection of his poetry in March 2009. The author and his translator, Jonathan Dunne, are in London to promote the book between 25 and 27 February, including an event at one of London’s most emblematic bookshops, Foyles.

The cover is the work of Michael Salu.

A full list of Galician books published in English can be found here.
Posted by Jonathan Dunne at 11:35 AM